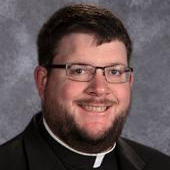 Father Carlson grew up in St. Paul, and was a parishioner at St. Joseph’s in West St. Paul. He graduated from Cretin-Derham Hall high school in 2001, and attended Bemidji State University for a year. In 2002, Father Carlson was accepted into St. John Vianney college seminary for the Archdiocese of St. Paul and Minneapolis, where he received his Bachelor’s degree in Philosophy and Catholic Studies. In 2006, he entered St. Paul Seminary where he received his Masters in Divinity and was ordained a priest in 2010 for the Archdiocese of St. Paul and Minneapolis. He served as an associate pastor at Epiphany in Coon Rapids and St. Ambrose in Woodbury before being installed as Pastor here at St. John the Baptist in July of 2013. Father Carlson has a great love for the sacraments, especially the Eucharist and Confession. He is also a big proponent of Catholic education, as it formed him into who he is today. He enjoys spending time with family and friends, golfing, and ice fishing.